Jim O’Connor, President of Douglas Elliman Property Management (DEPM) was honored on June 5th at The Bridge’s 60th Anniversary gala at the landmark Pierre Hotel. The event raised $466,000 to help support the broad range of mental health and housing services the non-profit provides to more than 2,300 New Yorkers every year. 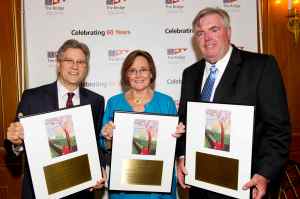 DEPM President Jim O’Connor (right) was honored along with Dr. Peter Beitchman, Bridge CEO, and Cynthia Wainwright, Bridge Board President, for their service to the organization and commitment to those in need.

In addition to his role as President and Executive Managing Director at DEPM, Jim is a member of the Real Estate Board of New York (REBNY), where he serves on the Residential Management Committee. He is also a Trustee of the Realty Advisory Board (RAB), and a member of their negotiating committee on labor contracts. He is on the Board of the Apartment Owners Advisory Council, and a member of the New York Building Managers Association. Jim is a proponent of affordable housing, and has helped raise funds for numerous New York charities. For his service to the real estate industry, his volunteer involvement, and his commitment to The Bridge, he was chosen as this year’s Individual Partner in Caring.

Also honored this year was Cynthia Wainwright, The Bridge’s Board President, who received the first ever Curtis Berger Award, for “her leadership, magnificent generosity of spirit, and dedication to The Bridge and the New York City area.” Cynthia has served on the Bridge Board for 30 years, and as its President for 20 years. She has also served on several other non-profit boards in New York City, including The Churchill School and Center for children with learning disabilities and the Children’s Museum of the Arts.

Dr. Peter Beitchman, DSW, LMSW, who is retiring this year after serving for 14 years as The Bridge’s CEO, received the Mental Health Award, presented by Manhattan Borough President Gale Brewer. Peter has been involved in the mental health system for 45 years, including 30 years with The Bridge. He has held key positions with both City and State mental and behavioral health agencies, and is an adjunct faculty member at both the Columbia and Hunter College School of Social Work. Peter was honored “for his vision, inspiring leadership and dedication to the mental health field and The Bridge.

Stephen Berger, Albert Mayas, James Miller, Elly Pateras and Howard Rothschild co-chaired this year’s gala, which included live music by “Midlife Crisis,” along with fortune tellers, a magician, and models dressed in ‘50s-style clothing to mark the era when The Bridge was founded. A silent auction of paintings by The Bridge Group Artists raised additional funds for the evening. The award plaques and invitations featured a beautiful painting titled “111 Morris Urban Farm” by Bridge Group Artist Michael Blamo.

Jenna Wolfe of NBC’s Today show acted as Master of Ceremonies, and Senator Kirsten Gillibrand made an appearance by video to congratulate Cynthia Wainwright on her award. Richard Cotto, a Bridge client, spoke to the room of 425 supporters and honorees about his journey fighting homelessness, mental illness and substance abuse, and how The Bridge’s programs and services had saved his life.

Jim’s wife, three sons, daughter and daughter-in-law were among the many friends, family and DEPM colleagues who attended the Gala awards ceremony and fundraiser.